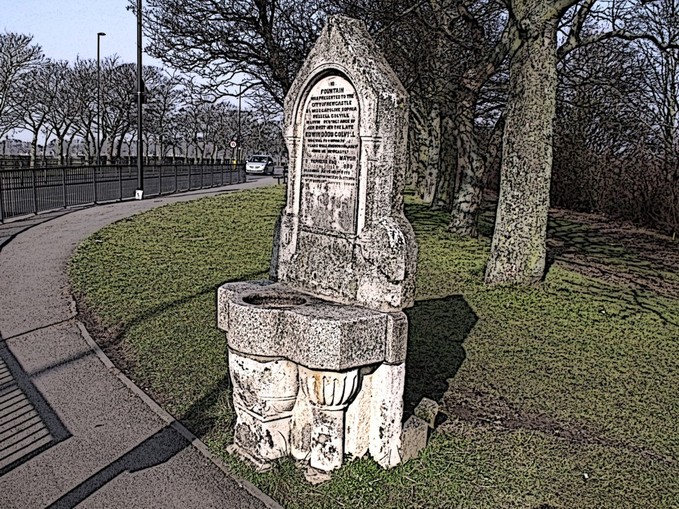 Situated at the junction of the Great North Road and  Forsyth Road, West Jesmond, Newcastle Upon Tyne.

This fountain, with its unfortunate resemblence to a gothic tombstone,  apparently “once rested against the wall of a building”. Some sources say it once occupied the site now filled by the W.D. Stephens drinking fountain, also on the Great North Road, a mile or so nearer to Newcastle.

Several years ago there was talk of moving it to lean against another wall somewhere, probably a good idea, it wasn't designed to be freestanding and looks a bit fragile. No action resulted, though, and its still there. 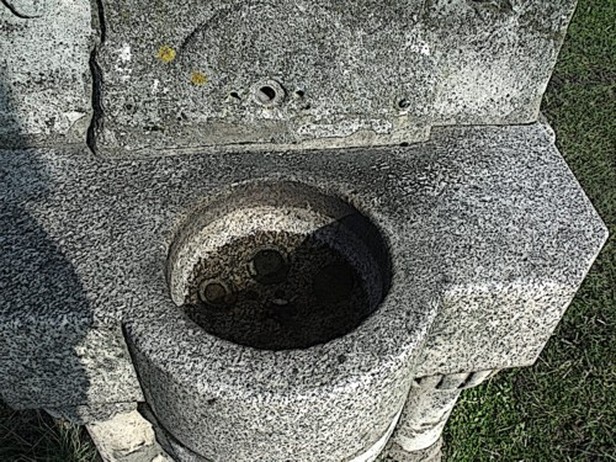 This fountain was presented to the City of Newcastle by Miss Caroline Sophia Russell Colvill in loving remembrance of her brother, the late Edwin Dodd Colvill who was for upwards (bit missing) years well and honourably known in Newcastle

(the rest is unreadable, although it appears to end with a biblical quotation, from Matthew).

From other sources it appears  it was unveiled  on 22nd August 1889.  All that seems to be known about Edwin Colvill is that he was  a coal fitter. 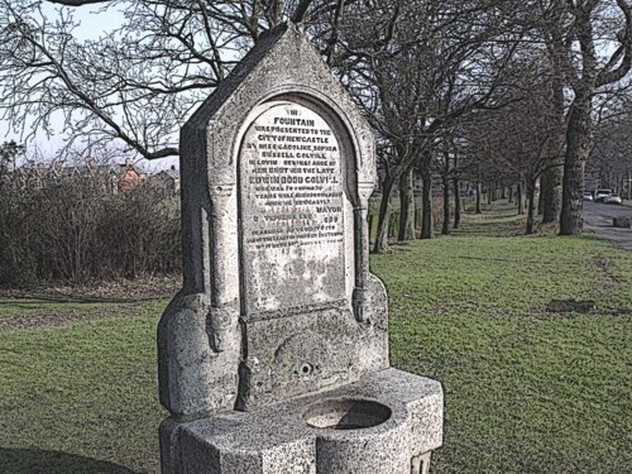 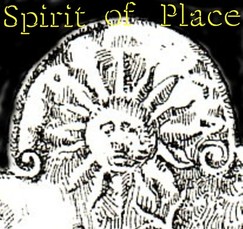 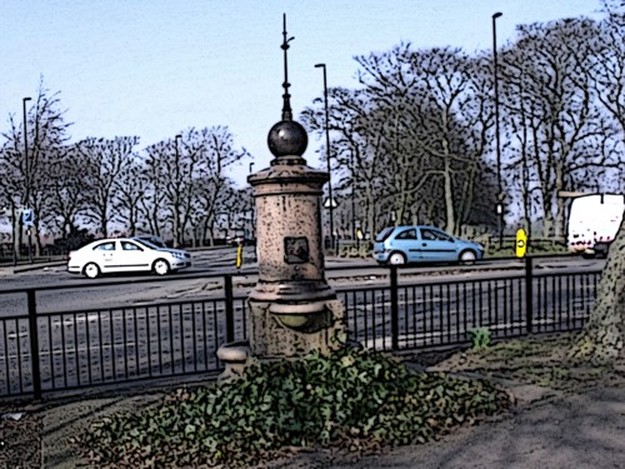 Situated at the junction of the Great North Road and Jesmond Dene Road, West Jesmond, Newcastle upon Tyne. 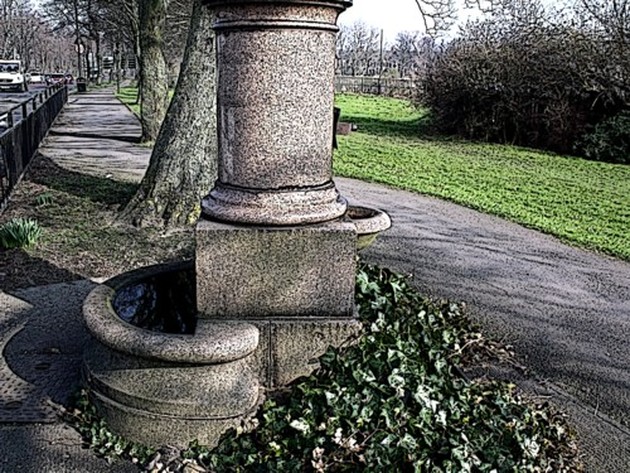 This fountain is officially described thus -

Complex design with basins at three levels executed in polished pink granite with a ball finial to the pillar surmounted by a decorative wrought iron feature.

There is an inscription carved into one side of the base.

The ground level has been raised by a rough concrete surround. 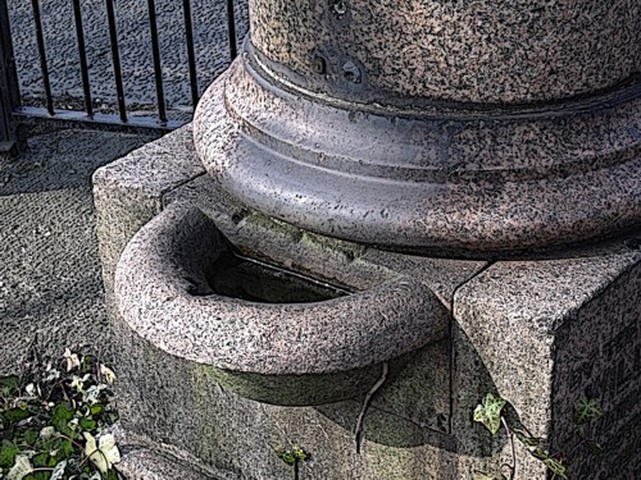 Erected by the widow of the late William Laing of Newcastle and Gosforth in affectionate remembrance of his lifelong interest in and kindness to all dumb animals. 1895.

A successful businessman, William Laing developed the Tyne Steam Shipping Co. with W. D.Stephens, who also has a drinking fountain on the Great North Road.

It is possible that his role as founder of the temperance festival on the adjacent Town Moor is the reason for the fountain being sited where it is.﻿﻿ 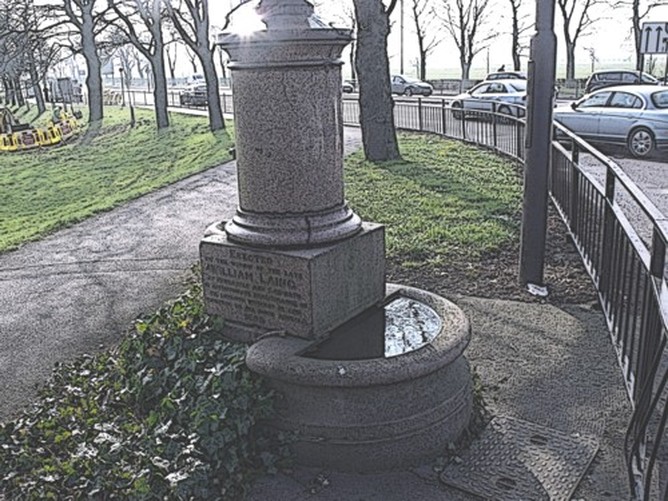 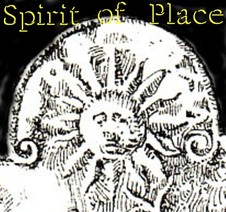 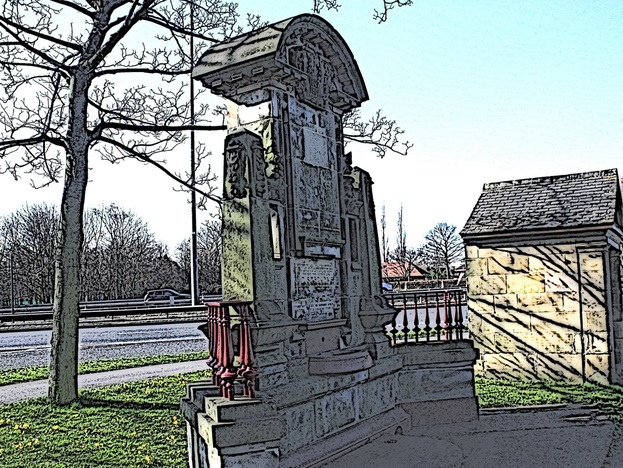 Situated at the junction of the Great North Road and Clayton Road.

In memory of William Davies Stephens 1827-1901, mayor and sheriff of Newcastle, methodist and temperance reformer. He started out in business with a chemical firm, Hugh Lee Pattinson & Co, and later developed the Tyne Steam Shipping Co. with William Laing. 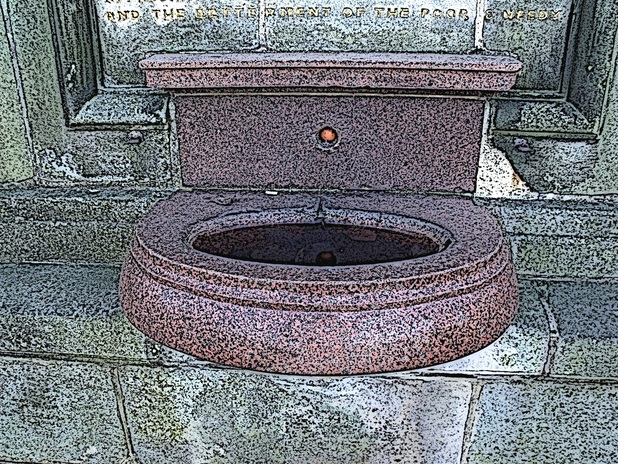 Initially in January 1906 the Stephens memorial committee considered erecting a monument in Newgate Street, where the medieval White Cross had been. The present site was chosen in September 1907.

Unfortunately this meant moving the Colvill fountain  which stood on the site further north to Forsyth Road. The advantage, however, was that the Stephens fountain was now close to Stephens's former home and 'those magnificent institutions on the Moor Edge in which Alderman Stephens took such a deep interest, and in whose welfare he took such an active part during his lifetime.'

With the building of the East Central Motorway the fountain had to be moved again some twenty feet, which cost £1,000. A photograph of the fountain before this happened shows that it originally boasted a relief roundel portrait of Stephens. 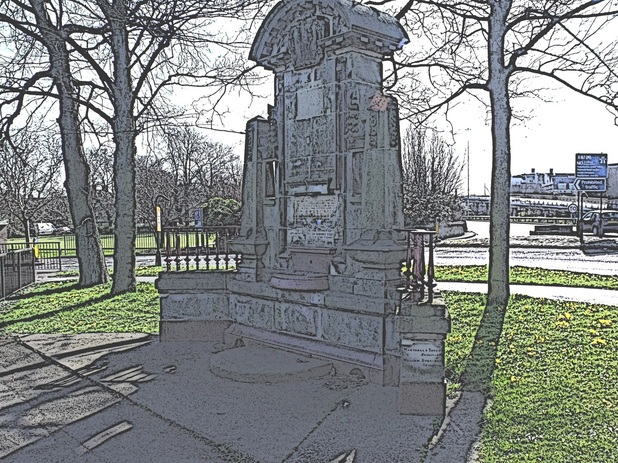 Erected by public subscription in recognition of the open hearted charity, ceaseless activity and unfailing geniality of W.D. Stephens, Alderman and J.P. of the city of Newcastle on Tyne, Sherriff 1879-80
Mayor 1887-88

Distinguished as the president of great organizations for the promotion of maritime commerce he earned still higher appreciation in the cause of temperance and the betterment of the poor and needy.

A citizen of lofty ideals and strenuous endeavour. 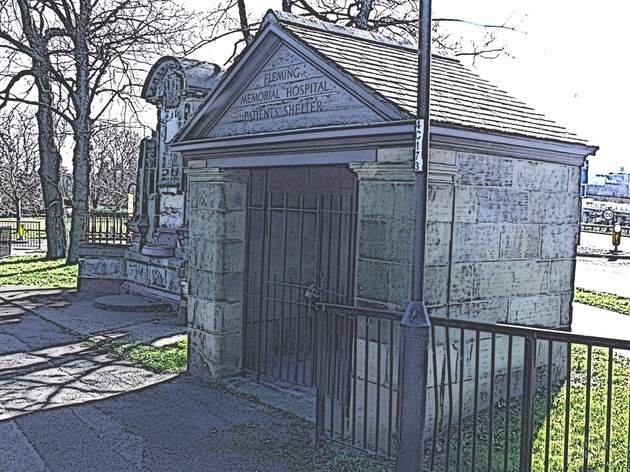 Adjacent to the fountain is a small building that on first sight looks rather like a well-house. In fact it is the  Fleming Memorial Hospital Patients Shelter.

A plaque on the wall reads:

This shelter - the gift of Stanley Miller - is intended for the use of patients and their parents visiting the Fleming Memorial Hospital for Sick Children. MCMXXVIII


The Fleming Memorial Hospital began its life in 1863 as the Children's Hospital, Hanover Square, Newcastle. In 1886, John Fleming, a Newcastle Solicitor gave £25,000 to build a new hospital for sick children in memory of his wife, who had died in 1882.

The Fleming Memorial Hospital at Moor Edge was officially opened by Lord Armstrong on 26 September 1888. It was closed in 1988 when the work of the hospital was transferred to the Fleming Wing of the Royal Victoria Infirmary. 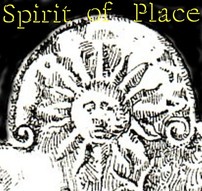