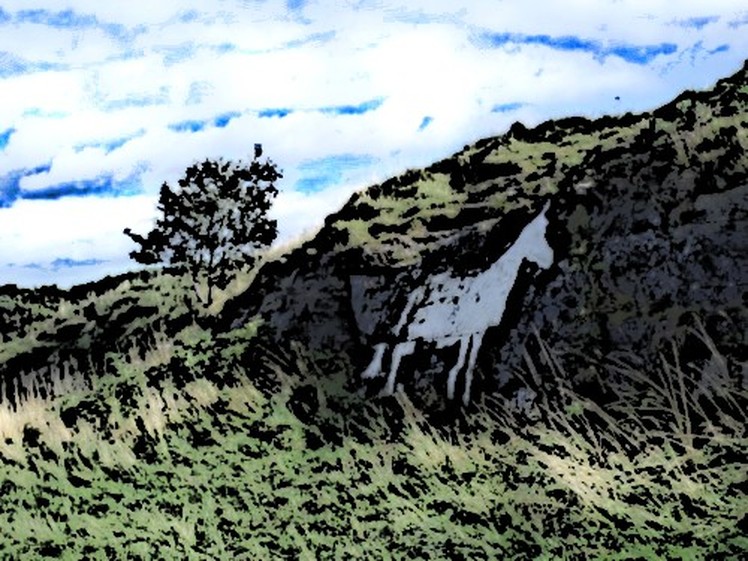 The White Horse is painted on a rock face in the Marsden Old Quarry nature reserve, off Lizard Lane, Marsden, South Shields. It appears to date back to at least 1887, though its origins are confused to say the least, and it has generated a number of stories of differing likelyhood. 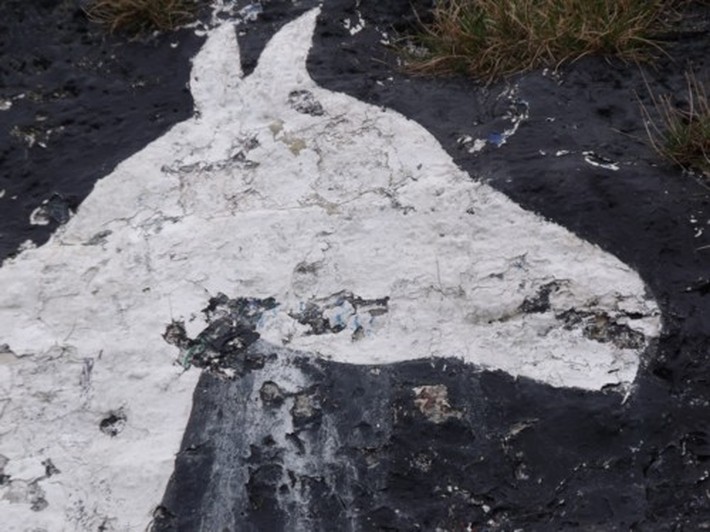 1 - A hunter got got seperated from his companions, and was eventually found dead, along with his white horse, at the foot of a cliff. The White Horse was painted to commemorate this event.

2 - Nestre, the daughter of a Saxon nobleman called Thalphere. who fell for a Dane called Rolf Hardre, who she used to meet on nearby Marsden beach. Rolf owned a white horse, which one day wandered off during their tryst, alerting Thalphere, who arrived mob-handed. Both Nestre and Rolf died in the ensuing fracas.  The white horse was later found dead at the foot of a cliff, and the White Horse was painted to commemorate this event. 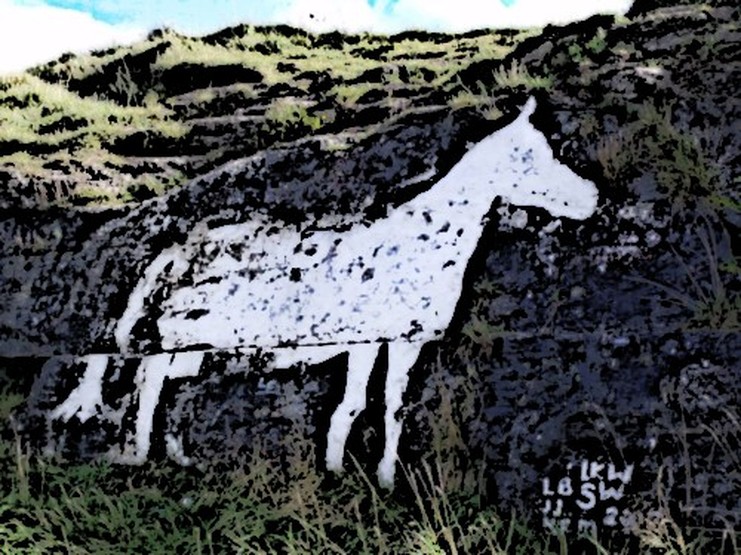 3 - Lady Williamson, wife of Sir Hedworth Williamson, frequented the beach on, yes, her white horse. One day she vanished and was never seen again (presumably the horse vanished too).  This story says that the Williamson's stableman, Wareham by name, painted the White horse to commemorate this event.

4 - A landowner by the name of Ness had it painted on a whim, to grace his estate. 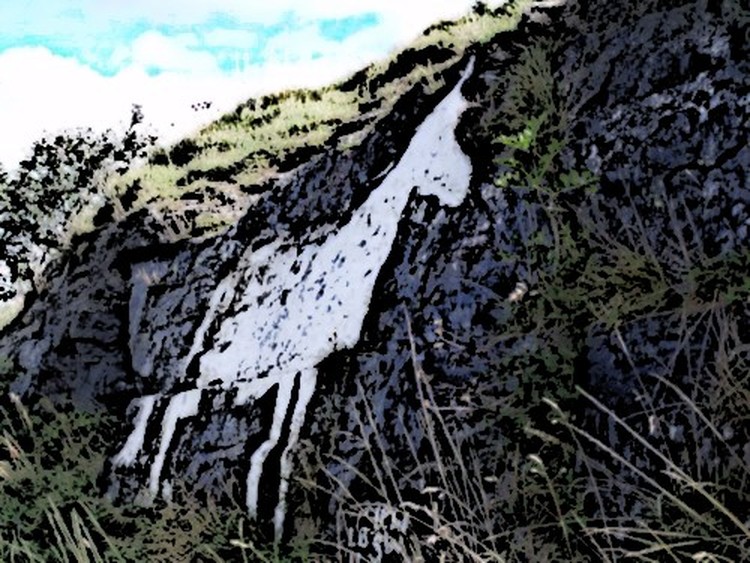 5 - A retired army colonel of the Napoleonic era could no longer ride his white battle charger, but kept it in a field within view of his house. One day it was stolen. The man charged with looking after it got around this by painting the White Horse, which fooled the colonel, who believed it to be his  (strangely immobile) horse.

6 - A certain farmhand, one William Johnson, tried to impress his master by breaking in a wild horse. Things went wrong, the horse went over a cliff and died, and the White Horse was painted to commemorate this event.

You pays your money and takes your choice. It should be pointed out that the Horse isn't very big (around life-sized) nor is its position particularly visible from the surrounding country.

Chalk white horse  hill figures are almost exclusively to be found it the south of England, however there is the Kilburn White Horse in Yorkshire, which was cut in 1857 on the orders of one Thomas Taylor, the work done by 30 men supervised by the village schoolmaster. It's said that Taylor had seen the Uffington White Horse and thought "I want one of those !"

Its not inconceivable that someone local had seen newspaper stories of the Kilburn horse, or even seen the figure itself, and thought "I want one of those too !" Which, if correct, would make option 4, the landowner with the whim, the most likely one.

1887 appears to be the earliest documented date attached to the White Horse, but it's not impossible it was first painted nearer to 1857, in the wake of the Kilburn figure's cutting. 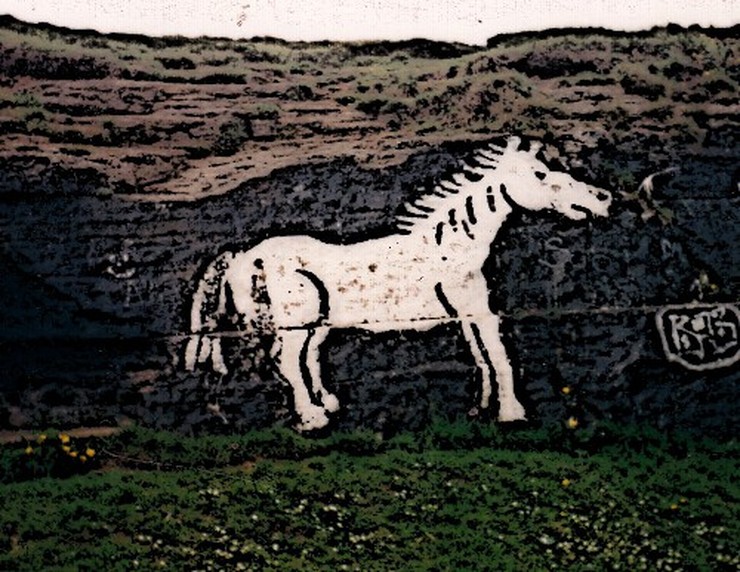 The Horse gets repainted every so often, apparently also on a whim by someone who decides it's time it was done, and it occasionally changes shape a bit. The earlier photos on this page were taken in 2013, but the feisty looking example above dates from the 1990s.

Well, until 2014 - when South Tyneside council decided to revamp the Horse, but without telling anyone - claiming they did not publicise it to combat potential vandalism.


“We are delighted to have been able to secure funding from Limestone Landscapes partnership – a project supported by the Heritage Lottery Fund – to have the White Horse re-painted.

“The restoration involved the removal of the existing paint and graffiti. Work started on Monday using a needle gun to remove the paint.

“The removal of the paint was completed yesterday.

“The horse has been repainted by a qualified artist, who works as a sign-writer for South Tyneside Homes and is the same man who has repainted it in the past.

“The council didn’t want to highlight the proposed works, as this may have attracted additional graffiti, which would have delayed the restoration.”


One local resident was demanding to know who is going to going to look after the iconic landmark which he and other people in the community had been taking care of over the years.


“The way it was handled has left quite a bad taste in the mouths of those of us who have been looking after the horse for a number of years now.

“We have all worked hard to maintain the area, seeking donations of paint and going on a regular basis to remove graffiti.

“Then along comes the council who just disregard everything we have done.

“They have managed to get rid of all the layers of history which had culminated over the years. You are never going to get that back.

“I know people who have volunteered their time to look after such an important part of the history of South Shields, but are very much reluctant to stay involved now the council has just steamrollered ahead with this.

“There has been no consultation about any of this work, and I would like to know now if the council are going to taking care of the upkeep of The White Horse in the future.”

Below is a photo of the Horse during renovation, September 2014. 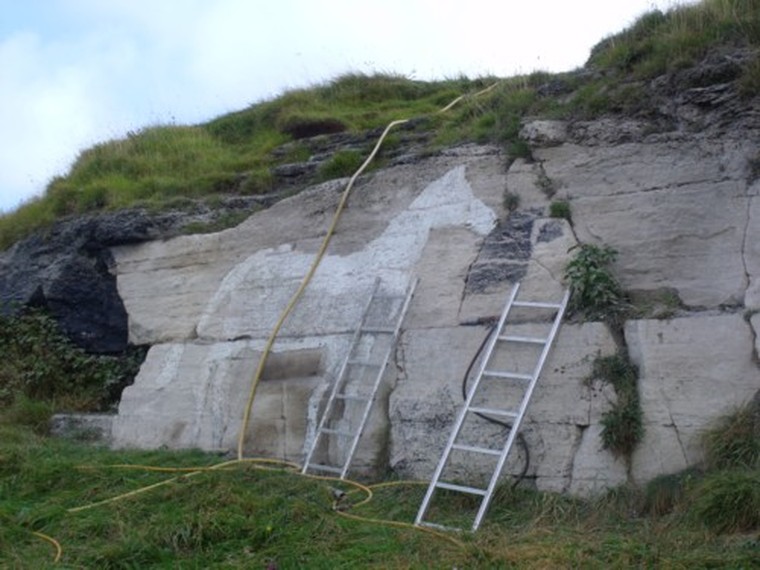