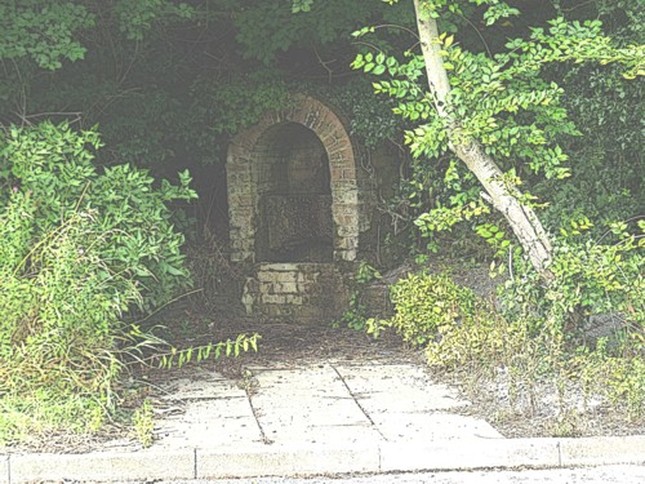 Located alongside the Dene Road, between Dalton-le-Dale and Seaham, County Durham.

I have to say straight off that this is really a Well With No Name. I only refer to it as Dalden Tower Well because it’s close - a minutes walk - from  the ruins of  that  fortified medieval manor house .

Despite being adjacent, its difficult to believe  that the well could ever have been the Tower’s primary water source.

A wayside wellhouse just a few feet from the fairly busy road between Dalton-le-Dale and Seaham - until recently it was virtually invisible, hidden in the marshy undergrowth.

Recent drainage and clearance work has once more revealed the rather utilitarian wellhouse built of brick. Hard to judge its age. No inscriptions, dates, ornamentation of any kind visible. 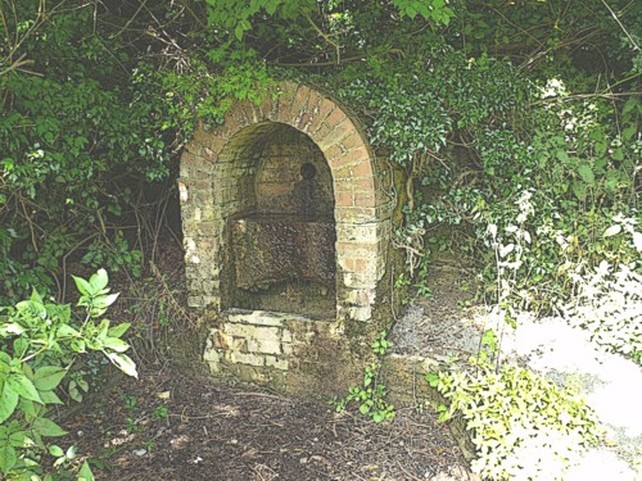 It’s built after a strange two-tier fashion - the water (a steady trickle if not exactly a torrent) enters through a pipe near the top of the structure and falls onto a sort shelf, from which it then trickles down to a second ledge nearer ground level.

Now things start to get a bit more complicated. There's an old photograph of an impressive looking, if slightly decrepit, well apparently located alongside the Dalton-le-Dale to Seaham road.  Could this be the same well ? 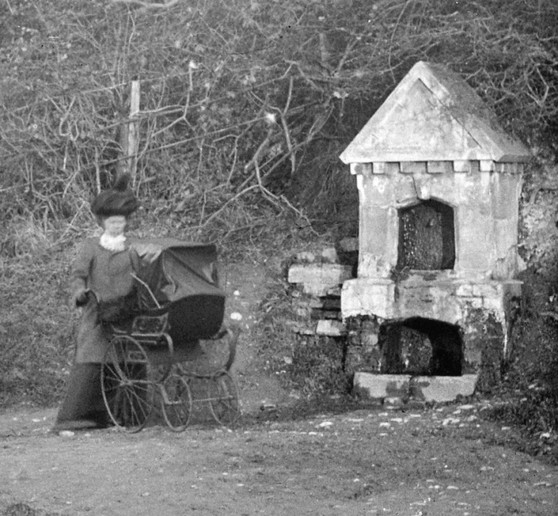 The Dalton-le-Dale to Seaham road only became a proper road in the 1880s, although  a track, probably something like what we’d call a green lane today, followed its general course pretty much since forever.

One book  which featured the above photo commented that the road ‘replaced the old bridal path in 1888, with this fountain placed at the halfway point.’

Sure, it bears little resemblence to the basic brick arch we see today  but....

Firstly, the well above appears to share the same curious  double-shelf  arrangement (was the lower trough meant for dogs or other animals?).

There is what appears to be the water spout high up in the top chamber - the same position as in our well.

Location ? Hard to tell, as its all overgrown today. But our well certainly seems to be built into the bank in the same manner. Whether its actually at the halfway point of the new road I'm not sure, but it could certainly be close - although on that point the well wasn't 'placed' there  - it's marked as a well on the 1861 map, well before the road.

The plaster on the lower parts of the well in this photo has fallen off, and we can see bricks underneath. I cant help wondering if the brick wellhouse we see today is actually the basic structure of the one in the photo. At some stage the rest of the facade may have flaked away,  leaving only the structurally-sound basic brick arch.

The more I look at this photo. the more I  begin to believe  that they are probably the same well. Not least because there isn't anything that looks like it anywhere else along this stretch of road, nor marked on any map I've ever seen.

You'd think something as handsome as that would have had a proper name, though, wouldn't you ?

Meanwhile,  since it was brought back into the public domain the well seems to have become a wishing well, judging by the amount of coinage evident. On previous visits I always slipped a coin in on general principles, but there was never any evidence  of anybody else doing so.

Evidently a new lease of life for an old well... 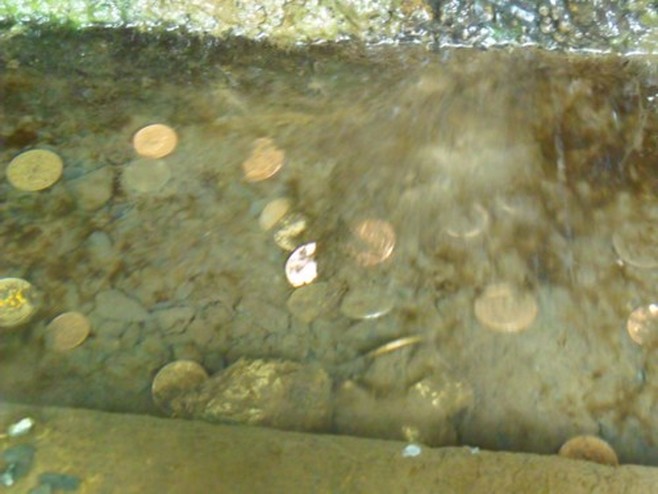 If you have any comments about or information regarding this well - does anyone know if it has a name ? - you can post them on the dedicated forum page at:
http://spirit-of-place.boards.net/thread/49/dalden-tower-county-durham